African Americans and the First Amendment

Timothy C. Shiell, African-Americans and the First Amendment: The Case for Liberty and Equality (State University of New York Press, 2019). 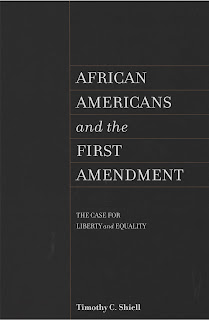 Timothy C. Shiell utilizes an interdisciplinary approach to demonstrate that a strong commitment to greater inclusion and participation. This crucial connection is evidenced throughout US history, from the days of colonial and antebellum slavery to Jim Crow: in the landmark US Supreme Court decision in 1937 freeing the black communist Angelo Herndon; in the struggles and victories of the civil rights movement, from the late 1930s to the late '60s; and in the historical and modern debates over hate speech restrictions. Liberty and equality can conflict in individual cases, Shiell argues, but there is no fundamental conflict between them. Robust First Amendment values protect and encourage demands for racial equality while weak First Amendment values, in contrast, lead to censorship and chilling demands for racial equality.