The Politicization of Safety: Critical Perspectives on Domestic Violence Responses

Domestic violence is commonly assumed to be a bipartisan, nonpolitical issue, with politicians of all stripes claiming to work to end family violence. Nevertheless, the Violence Against Women Act expired for over 500 days between 2012 and 2013 due to differences between the U.S. Senate and House, demonstrating that legal protections for domestic abuse survivors are both highly political and highly vulnerable. Racial and gender politics, the move toward criminalization, reproductive justice concerns, gun control debates, and political interests are increasingly shaping responses to domestic violence, demonstrating the need for greater consideration of the interplay of politics, domestic violence, and how the law works in people’s lives.

The Politicization of Safety provides a critical historical perspective on domestic violence responses in the United States. It grapples with the ways in which child welfare systems and civil and criminal justice responses intersect, and considers the different, overlapping ways in which survivors of domestic abuse are forced to cope with institutionalized discrimination based on race, gender, sexual orientation, and immigration status. The book also examines movement politics and the feminist movement with respect to domestic violence policies. The tensions discussed in this book, similar to those involved in the #metoo movement, include questions of accountability, reckoning, redemption, healing, and forgiveness.

What is the future of feminism and the movements against gender-based violence and domestic violence? Readers are invited to question assumptions about how society and the legal system respond to intimate partner violence and to challenge the domestic violence field to move beyond old paradigms and contend with larger justice issues.
- Publisher's description

Authors and Apparatus: A Media History of Copyright

Copyright is under siege. From file sharing to vast library scanning projects, new technologies, actors, and attitudes toward intellectual property threaten the value of creative work. However, while digital media and the Internet have made making and sharing perfect copies of original works almost effortless, debates about protecting authors' rights are nothing new. In this sweeping account of the evolution of copyright law since the mid-nineteenth century, Monika Dommann explores how radical media changes―from sheet music and phonographs to photocopiers and networked information systems―have challenged and transformed legal and cultural concept of authors' rights.

Dommann provides a critical transatlantic perspective on developments in copyright law and mechanical reproduction of words and music, charting how artists, media companies, and lawmakers in the United States and western Europe approached the complex tangle of technological innovation, intellectual property, and consumer interests. From the seemingly innocuous music box, invented around 1800, to BASF's magnetic tapes and Xerox machines, she demonstrates how copyright has been continuously destabilized by emerging technologies, requiring new legal norms to regulate commercial and private copying practices. Without minimizing digital media's radical disruption to notions of intellectual property, Dommann uncovers the deep historical roots of the conflict between copyright and media―a story that can inform present-day debates over the legal protection of authorship.
- Publisher's Description

Pigs are everywhere in United States history. They cleared frontiers and built cities (notably Cincinnati, once known as Porkopolis), served as an early form of welfare, and were at the center of two nineteenth-century “pig wars.” American pork fed the hemisphere; lard literally greased the wheels of capitalism.

J. L. Anderson has written an ambitious history of pigs and pig products from the Columbian exchange to the present, emphasizing critical stories of production, consumption, and waste in American history. He examines different cultural assumptions about pigs to provide a window into the nation’s regional, racial, and class fault lines, and maps where pigs are (and are not) to reveal a deep history of the American landscape. A contribution to American history, food studies, agricultural history, and animal studies, Capitalist Pigs is an accessible, deeply researched, and often surprising portrait of one of the planet’s most consequential interspecies relationships.

This volume offers a detailed analysis of the issues related to the protection of non-traditional marks.

In recent years, the domain of trademark law and the scope of trademark protection has grown exponentially. Today, a wide variety of non-traditional marks, including colour, sound, smell, and shape marks, can be registered in many jurisdictions. However, this expansion of trademark protection has led to heated discussions and controversies about the impact of the protection of non-traditional marks on freedom of competition and, more generally, on socially valuable use of these or similar signs in unrelated non-commercial contexts. These tensions have also led to increasing litigation in this area across several jurisdictions.

This book provides an overview of the debate and state of the law surrounding non-traditional marks at the international, regional, and national level. In particular, this book addresses relevant international treaties administered by the World Intellectual Property Organization (WIPO) and the Agreement on Trade-Related Aspects to Intellectual Property Rights (TRIPS) as well as several regional and national legislations and leading judicial decisions in order to examine current law and practice culminating in critical reflections and suggestions on the topic. 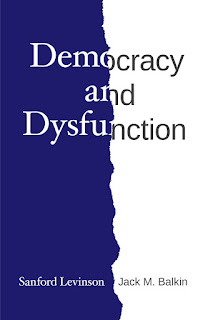 “Democracy and Dysfunction is a conversation between two of the leading constitutional law scholars of our time, Sanford Levinson and Jack M. Balkin, who seek to uncover the underlying causes of our current difficulties and the best way to reform American democracy. In a series of letters exchanged over a period of two years, Levinson and Balkin travel through the convulsions of the 2016 election and Trump's first year in office. They disagree about the scope of the crisis and the remedy required. Levinson believes that our Constitution is fundamentally defective and argues for a new constitutional convention. Balkin, who believes we are suffering from constitutional rot, argues that there are less radical solutions.”