Amy Gajda, Seek and Hide: The Tangled History of the Right to Privacy (Viking, 2022). 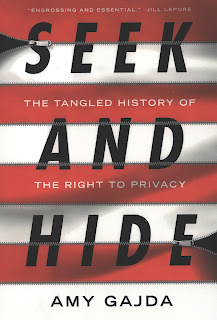 Today privacy seems simultaneously under siege and surging. And that's doubly dangerous, as legal expert Amy Gajda argues. Too little privacy can mean extraordinary profits and power for people who deal in and publish soul-crushing secrets. Too much means the famous and infamous can cloak themselves in secrecy. Seek and Hide carries us from the very start, when privacy concepts first entered American law and society, to now, when the law
allows a Silicon Valley titan to destroy a media site like Gawker out of spite. Muckraker Upton Sinclair, like Nellie Bly before him, pushed the envelope of privacy and propriety and then became a privacy advocate when journalists used the same techniques against him. In the 1960s those privacy interests gave way to the glory days of investigative reporting in the era of Vietnam and Watergate. By the early 2000s we were on our way to today's full-blown crisis in the digital age, worrying that smartphones, webcams, basement publishers, and the forever internet had erased the right to privacy completely. The stories touch on the famous and the worthy but barely remembered, on presidents with secret babies, and on the evolution of a modern media emboldened to reveal the most intimate details about anyone -- and how so much of today rests on Section 230, a 1996 federal law that became privacy's downfall and then the catalyst for its rebirth.