Troublemakers: Students' Rights and Racial Justice in the Long 1960s 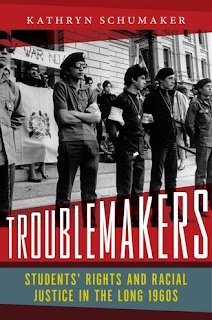 In the late 1960s, protests led by students roiled high schools across the country. As school desegregation finally took place on a wide scale, students of color were particularly vocal in contesting the racial discrimination they saw in school policies and practices. And yet, these young people had no legal right to express dissent at school. It was not until 1969 that the Supreme Court would recognize the First Amendment rights of students in the landmark Tinker v. Des Moines case.

A series of students’ rights lawsuits in the desegregation era challenged everything from school curricula to disciplinary policies. But in casting students as “troublemakers” or as “culturally deficient,” school authorities and other experts persuaded the courts to set limits on rights protections that made students of color disproportionately vulnerable to suspension and expulsion.

Troublemakers traces the history of black and Chicano student protests from small-town Mississippi to metropolitan Denver and beyond, showcasing the stories of individual protesters and demonstrating how their actions contributed to the eventual recognition of the constitutional rights of all students. Offering a fresh interpretation of this pivotal era, Troublemakers shows that when black and Chicano teenagers challenged racial discrimination in American public schools, they helped remake American constitutional law and establish protections of free speech, due process, equal protection, and privacy for students.